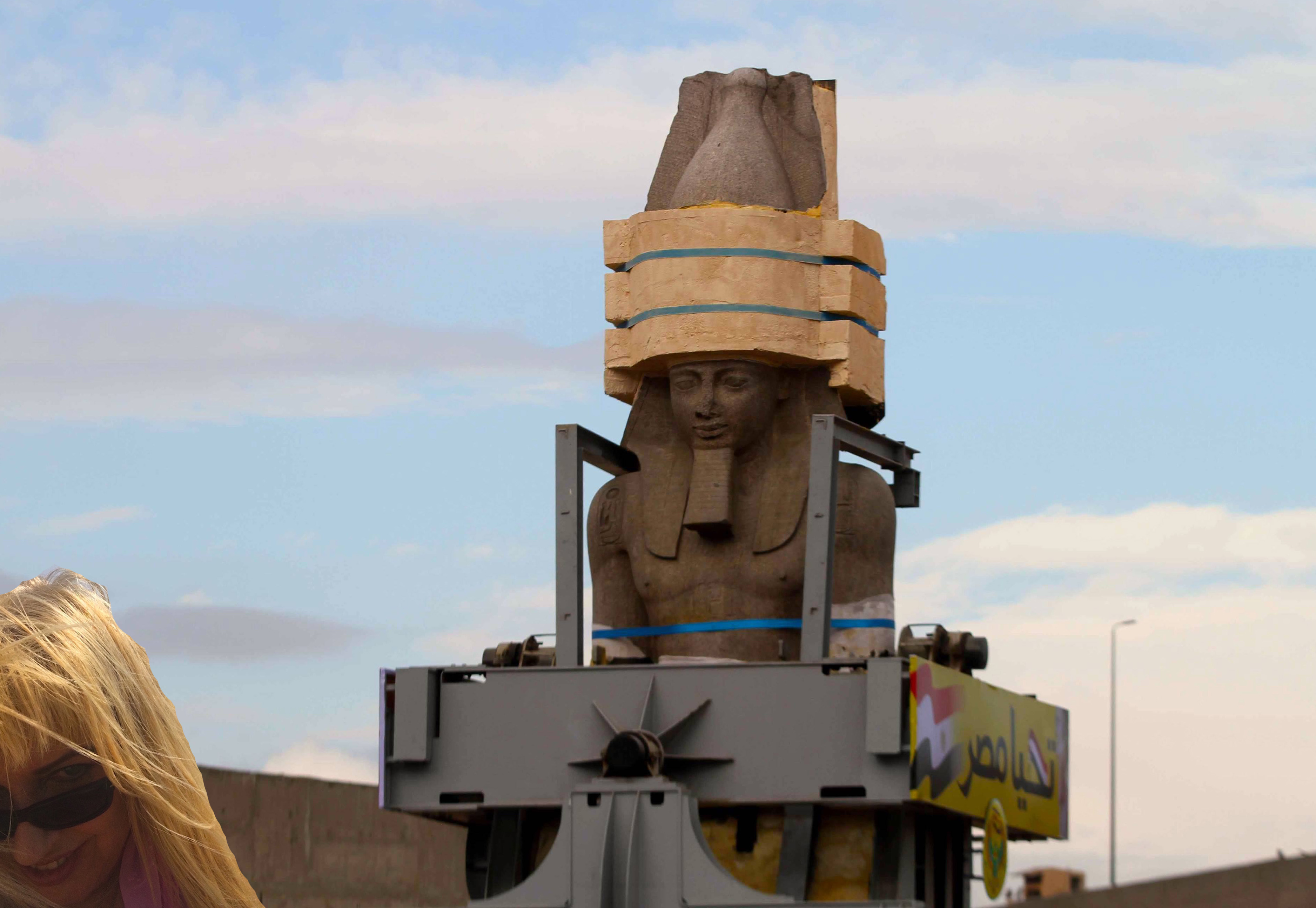 Pharaoh Ramses II on the move again and his incredible journey

The statue of Pharaoh Ramses II “deposited” and stored for 12 years outside, since 2006, in the enclosure of the Great Egyptian Museum (GEM) which is under construction in Giza at the foot of the pyramids, is transported today with great pomp, at the entrance of the monumental hall that will welcome future visitors from around the world … This is normally his last home. Few people know that this monumental statue has already walked a lot and I can’t resist showing you here in photos, the incredible walk of the Pharaoh to the foot of the pyramids, his incredible journey given its size and weight.

Ask yourself how this colossal statue of the Pharaoh more than 83 tons and 10 m high could follow without damage the journey that I will describe to you!

Know first that this statue was carved in the quarries of Aswan and then transported to Mit Rahina near Memphis on the Nile more than 3000 years ago. Then it was found in six pieces in Badrashin next to the old Memphis, near the temple of Ptah in the palm grove in 1882 and luckily it wanted  to remain in Egypt because the English who tried everything to transport it to England did not succeed ! It seems that Pharaoh did not want to go under the cold mists of the perfidious Albion! 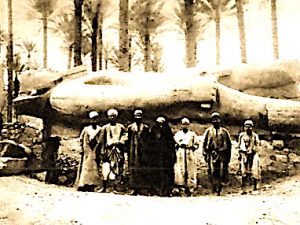 Then in 1954, Gamel Abdel Nasser in a nationalist movement, carried it on the place Bab el Hadid in the center of Cairo which was at the time the place of the central station of the city and makes it reinforced with bars of iron. He changed the name of the place to “Ramses Square” in the honor of the Pharaoh. This place was airy, beautiful and covered with greenery and you could see the statue from a distance of 2 km around, according to the stories of the time. 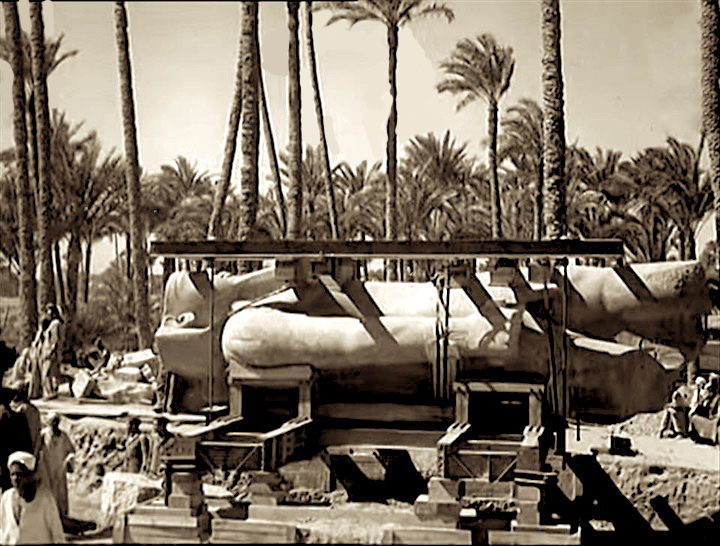 A military convoy is organized at the time and the statue is transported about forty km on tanks. In addition, a bridge is reinforced to make it pass and reach the station square. Look at the square in the photos: how spacious it was at the time! 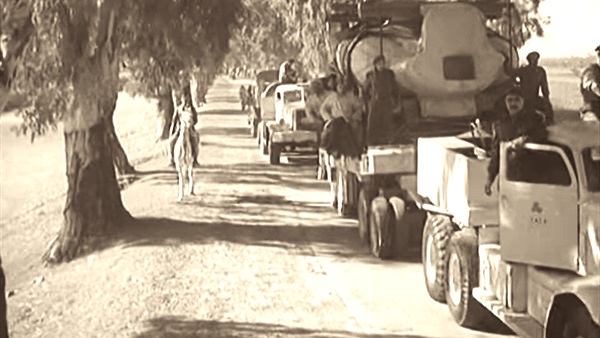 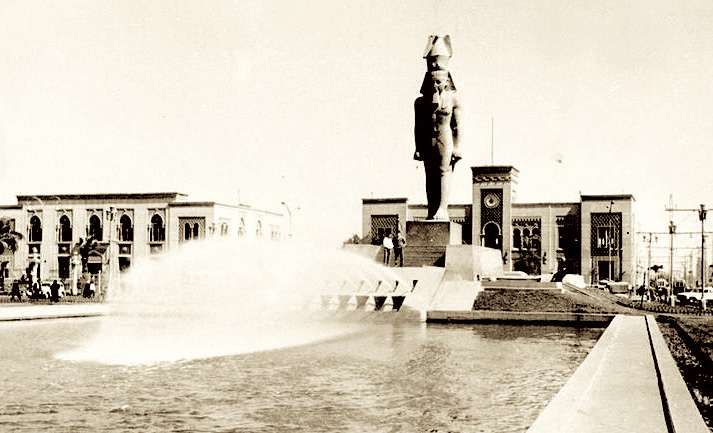 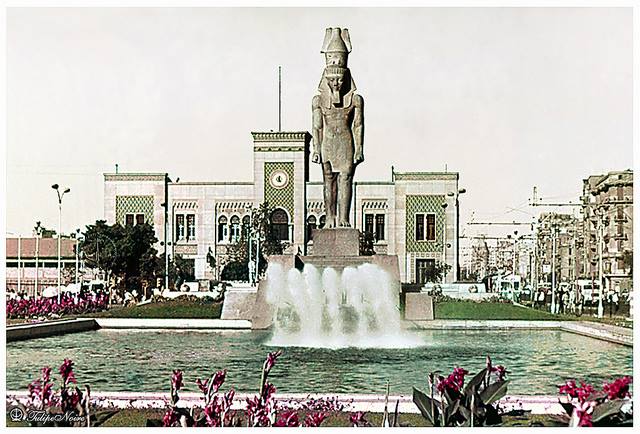 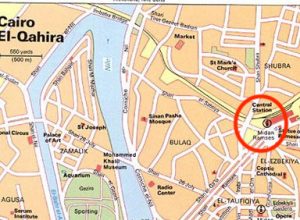 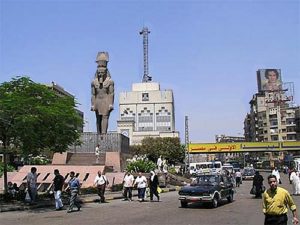 Then in August 2006, the government decided, 12 years later, to repatriate to the Pyramids the statue of Pharaoh. Several reasons for this: first the authorities said:

“For his trip we apologize to this great King whose statue suffered greatly from his installation.” 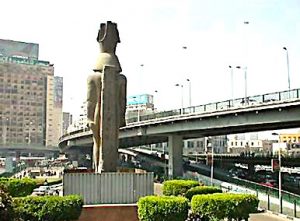 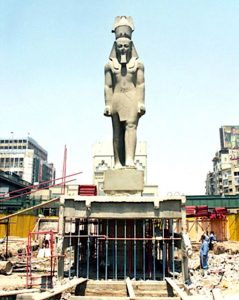 Indeed, in 1955, there were much less important means for the transfer of Pharaoh and we know that for example: the pedestal had suffered well. On the other hand in 2006, the pollution rate, the traffic of cars became incredible on this place, plus the vibrations of the metro: all that put in great danger the statue of the pharaoh. It was necessary to take care of the statue urgently and to put it in a more protected place. And also the project of the new Egyptian Grand Museum in Giza started at the foot of the pyramids. The return of Ramses to Memphis had become impossible because of a small local bridge that would have had to be completely rebuilt because of the mass of the huge trucks and modern cranes adding to that of the statue. And it was decided in 2002 to program the transport of Pharaoh to the huge construction site of the new Museum in Giza. His walk was going to start again in 2006! 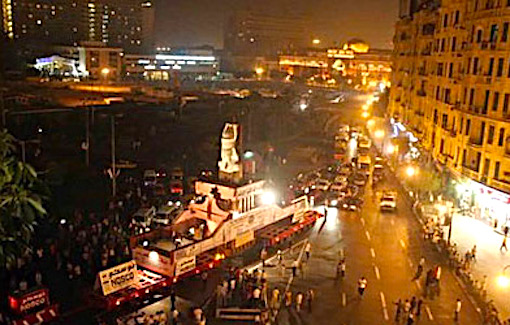 It is first carefully removed from the square in 2006, then surrounded by an iron strapping. It was conducted in a special military convoy, not without reinforcing once again, a bridge over the Nile for its passage. And the great motorcade 30 km long started from the center of Cairo early in the morning when it was still dark until its arrival on the site of the Giza Museum acclaimed throughout the course by the Egyptian crowd jubilant. An unforgettable show! The transport cost 6M Egyptian pounds but the one of today in 2018 : the double. 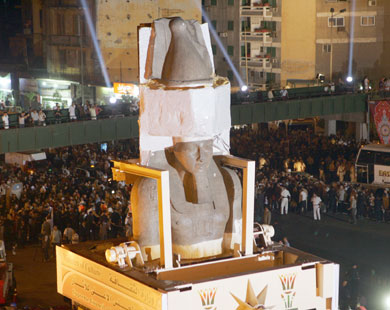 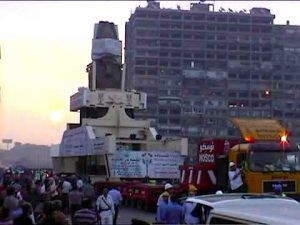 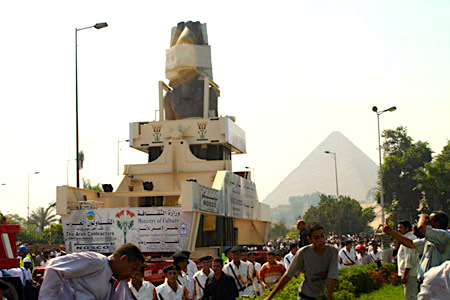 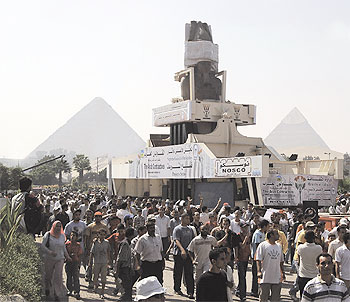 Here is his place of arrival (photos below) on the site of the Museum in Giza in 2006 and since Pharaoh had not moved …. 12 years to breathe the desert wind at the foot of the pyramids, locked in its protective box in iron … 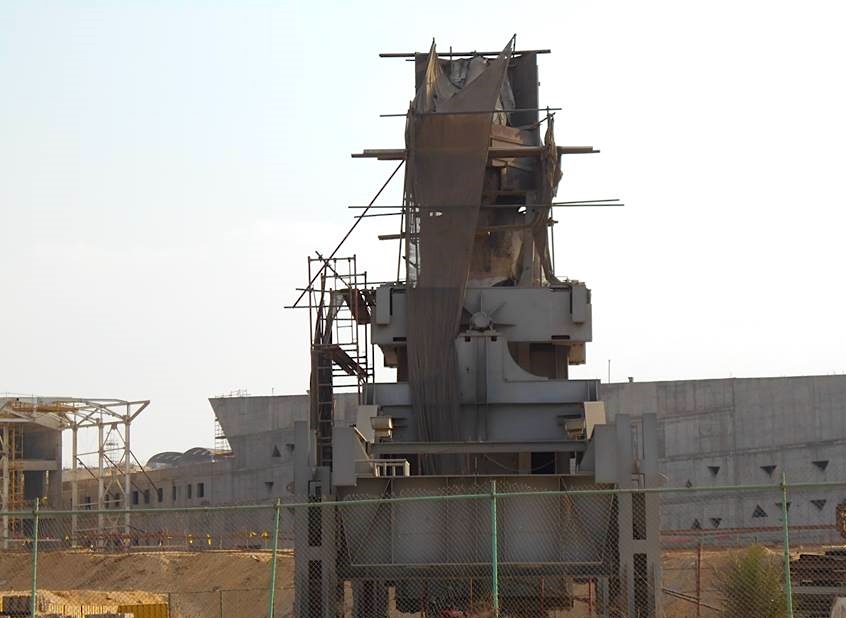 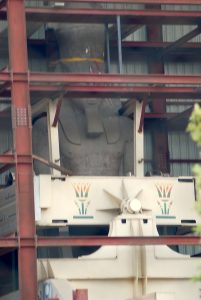 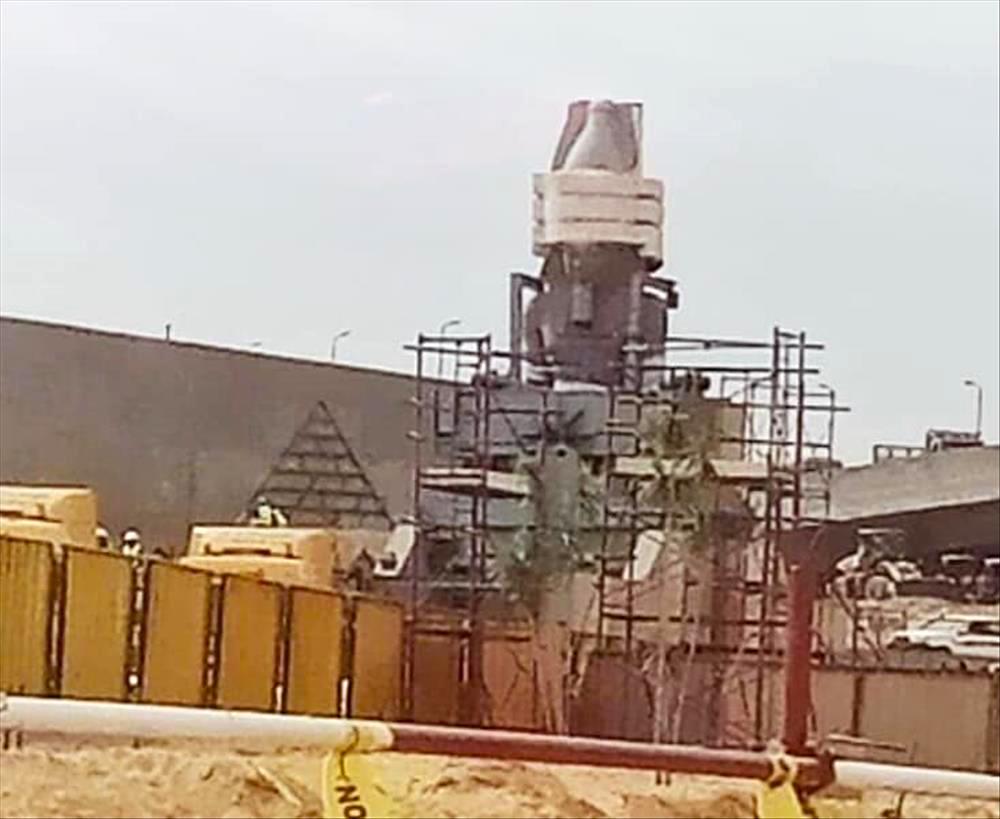 And today, the statue of the pharaoh has traveled a distance of 400M sloping, on an iron bridge and attached in pendulum so that the statue can move freely. Although much shorter this time, the transport is more delicate and they had to test and made a special floor to support the 83 tons and removed the protective foam gum for stronger reinforcements. 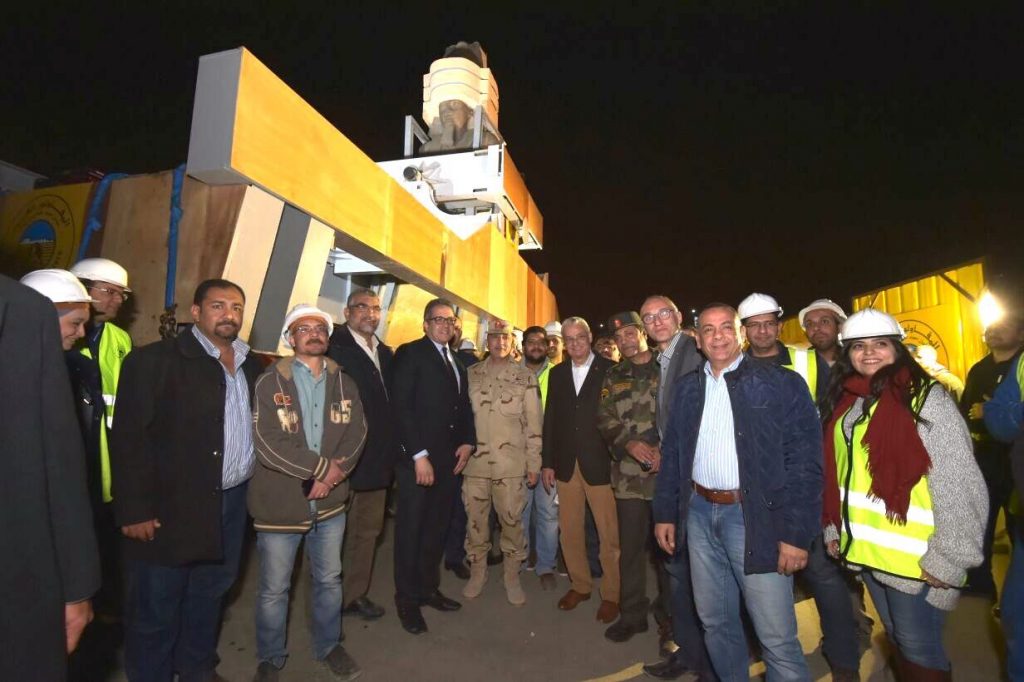 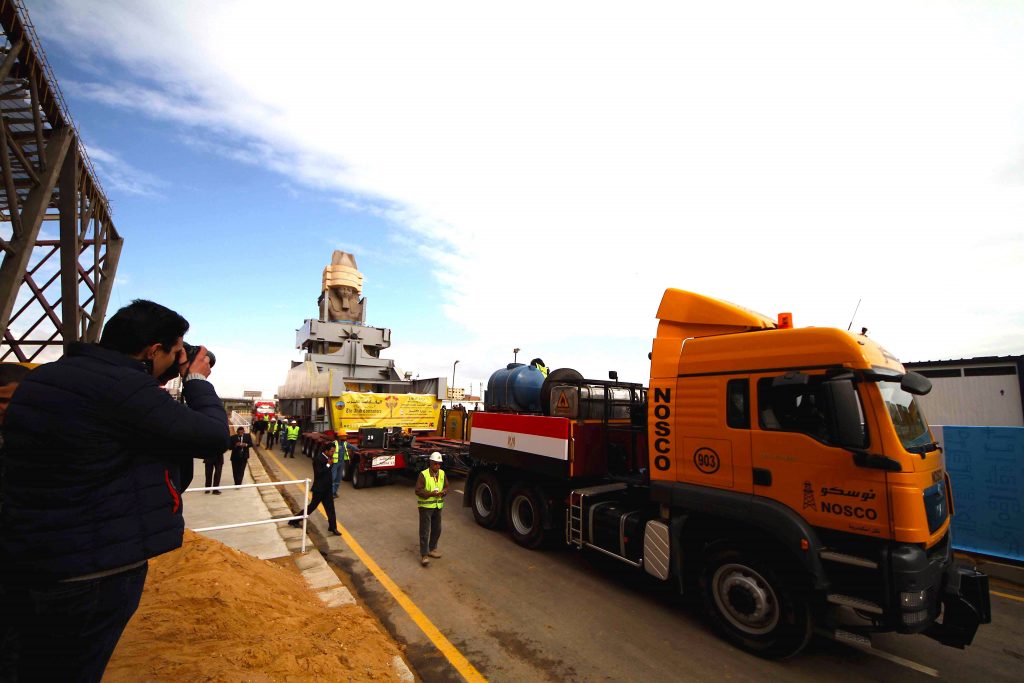 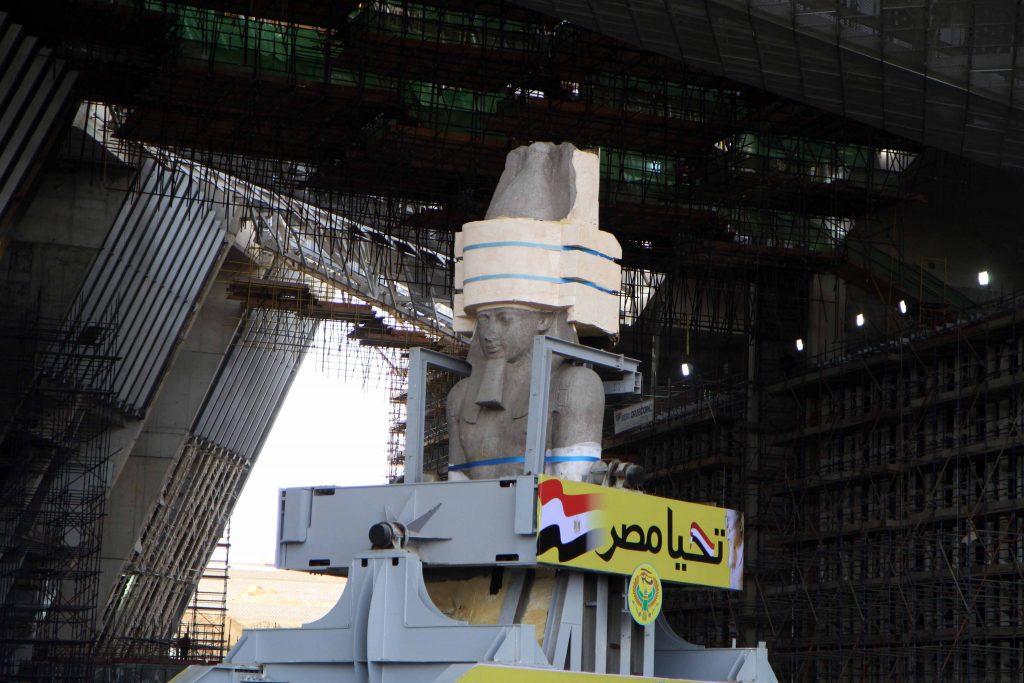 And this morning, finally: Ramses II begins to move for his final home with an impressive crowd of officials, journalists from around the world and the Egyptian people. Pharaoh is gone! He has reached a residence worthy of him in the hall of the new Museum and watches over all the Antiquities of the Grand Egyptian Museum which will open its doors for the public at the end of the year … 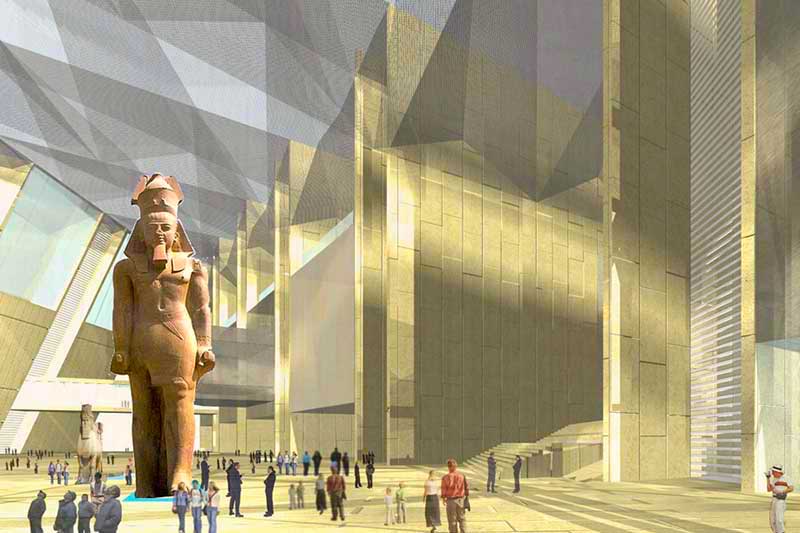 What are meaning the latest discoveries in the Great Pyramid?

Wonderful! Merci mon ami for the insight and history into this collosus! Reading your words I felt as though I was there. A Vitory for Ancient art preservation and veneration. As it should be… 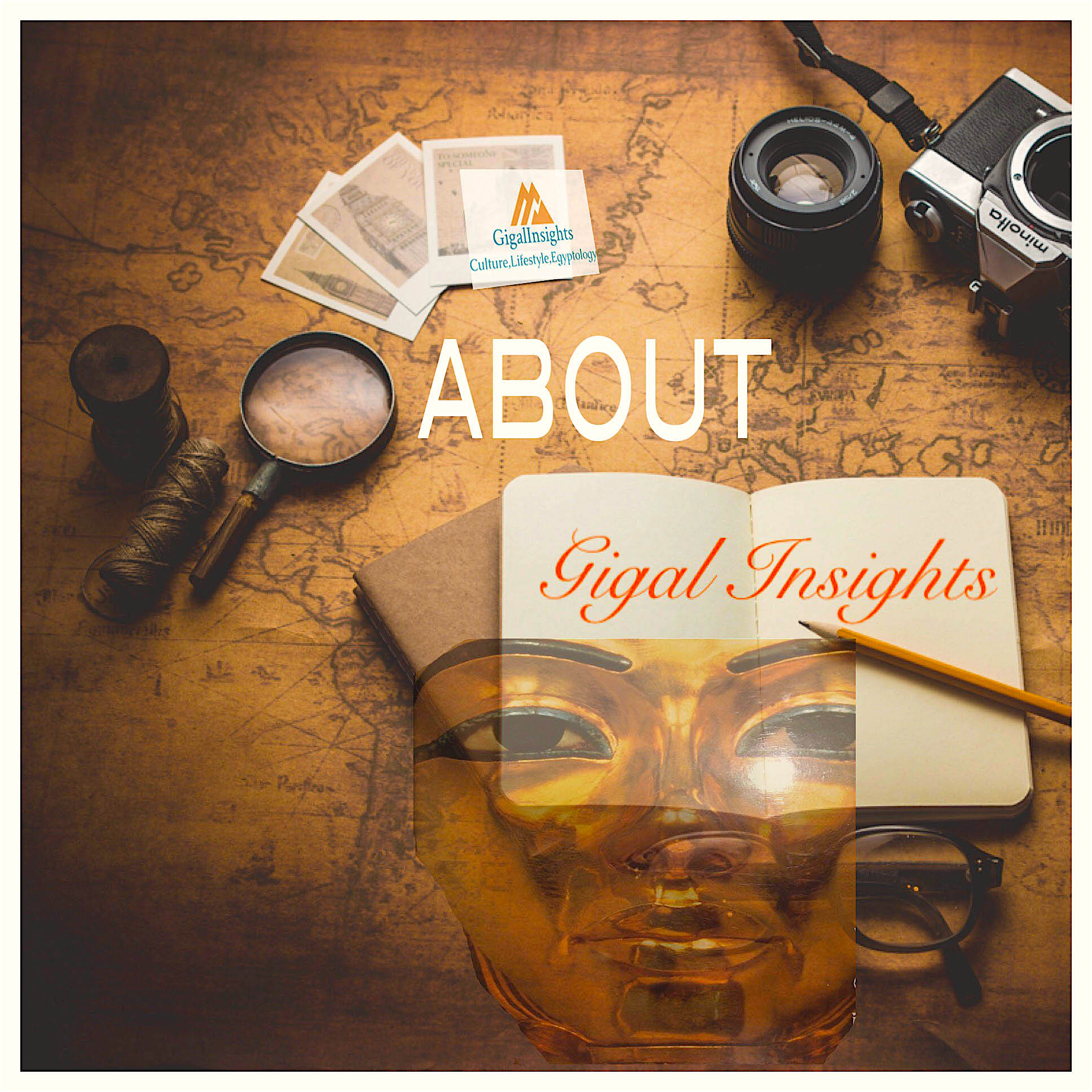